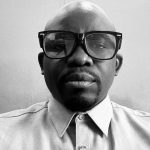 Born to Nigerian immigrant parents, Chinedu Felix Osuchukwu spent his early years between his birthplace of DC and Nigeria. His work shows that he has been greatly influenced by his Nigerian-American culture. A Native to Washington DC Osuchukwu graduated from Duke Ellington School of the Arts and received his BFA from Corcoran College of Art and Design in Washington, DC. More recently he completed his Masters in Fine Arts at Maryland Institute College of the Arts (MICA) in Baltimore. His works are about the exploration of his Igbo-Washingtonian Identity.  Chinedu has been featured in Oprah Winfrey’s O Magazine, and his pieces have been in the personal collections of Peggy Cooper Cafritz and Bill &Melinda Gates. His mediums vary from sculpture to murals. Two of his most prominent murals were in NW and SE DC. One of which was located on U Street which has been recognized and funded by Murals DC. And his second mural was commissioned by Kaboom and Michelle Obama. In 2016 he was selected to be a part of DC Commission of the Arts “Washingtoniana Collection” putting a stamp on his contributions to the DC Art community. In 2017 he was appointed by Mayor Muriel Bowser as commissioner of the DC Commission of the Arts and Humanities. Osuchukwu is also an accomplished teacher who has been teaching Visual Art in Washington DC area schools for over twenty years. Chinedu is also the founder and CEO of an arts education and portfolio development program. He finds his strength being active in the community through church as a Eucharistic minister and by sharing his art. He has also been an invited artist, speaker, and judge to conferences on the arts by the NAACP and Congressional Black Caucus. His reach has also had him collaborate with pharmaceutical giant Genetech on the launch of a painted shoe for a new  Hemophilia product Hemlibra , additionally he has partnered with the National Hemophilia Foundation where he has also inspired kids who have a bleeding condition in therapeutic arts. Most recently his artwork has been acquired by the Studio Museum of Harlem on permanent collection in New York City and he has been featured in the new Netflix Movie “Really Love”. Chinedu currently  resides in Washington DC with his two daughter, two sons, and wife.